How to Play Demon Solitaire

This game is better known as Canfield in America, named after the inventor, Richard A. Canfield, a well known nineteenth century gambler. Determined to make some money from his game, he offered players the chance to buy a deck of cards for $50, in his casino in Saratoga, and use it to play a hand of the game under close scrutiny of the croupier. At the end of the game, $5 was paid for every card in the foundation piles (no re-deals allowed) or $500 if the game came out. Canfield made a fortune out of the game, and today's rules have been altered in favour of the player. In England, the game is called Demon and as I say "tom-arr-toe" rather than "tom-ay-do", Demon it is ! Anyway, all the other computer versions I've seen are called Canfield so it's good to have a change.

The game is played with a single, standard pack of 52 playing cards. 13 cards are dealt in a column to form a reserve, known as The Demon with just the single exposed card being turned face up. The next card is dealt face up, to the right of The Demon, to start the first of four foundations. Unlike Klondike where the Aces start the foundations, this card becomes the foundation base in Demon and will change from game to game so remember what it is. During the game, as each of the three cards of the same rank as this base card becomes available, it is placed in line with the first to begin the remaining foundations. Four cards are then dealt face up to the right of The Demon and below the foundations to form the tableau. When this is done, the remaining cards are placed face down to form the stock and we're all set for a game of Demon ! If you forget what the foundation base card was during the game then you can use a right click of the mouse while over a foundation to jog your memory. 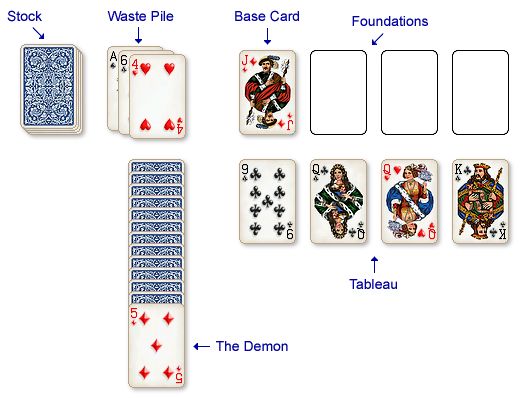 The object of the game is to build each foundation up in ascending suit sequence until it contains 13 cards of the same suit, turning the corner at J

Cards are dealt from the stock to a waste pile, in groups of three. The top, exposed card of this waste pile is available for play, releasing the card beneath. All moves should be made before turning the next group of three from the stock. Single cards may be transferred to the foundations from the top of the waste pile, from The Demon, or if exposed, from the bottom of a tableau column. Cards may be built on the tableau in a descending sequence of alternating colours, just like in Klondike, e.g. 6

. Tableau columns may also turn the corner from Ace to King, e.g. 4

. A complete packed column may be cleared out by building on top of another, provided the join follows the same rule. As soon as a tableau column is cleared out, it must be filled with the exposed card of The Demon releasing the card below. However, if there are no cards left in The Demon, then the space may be filled with an exposed card from the waste pile, but not necessarily immediately. When the stock has been exhausted, the waste pile may be turned over to form a new one. Unlimited re-deals are allowed until the game either comes out or blocks.

Press the right mouse button over one of the foundations to remind yourself what the base card was.