How to Play Eliminator Solitaire

Eliminator is a game of speed, similar to Golf, but with a few more options that slow down the pace and make you look a bit more deeply at the card layout.

The game is played with a single pack of 52 playing cards. After thoroughly shuffling the deck, the cards are dealt into 4 columns of 13 cards each. The game then begins. 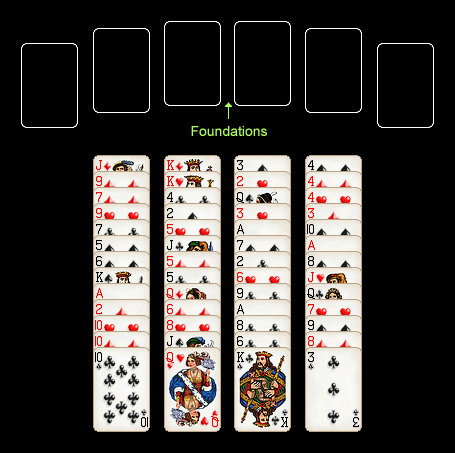 The object of the game is to remove all cards from the four columns by building on the six foundations either up or down in card rank, regardless of suit.

To start the game, you must move one of the four, exposed column cards to a foundation. Building then occurs on this foundation in ascending or descending sequence regardless of suit. In the above example, the most sensible play would to initially move the K

to one of the foundations, then build the Q

on top of it, followed by the J

. No further building would be possible on the 10 and you would then have to transfer another exposed column card to one of the other five foundations to hopefully create some more building opportunities. Foundations may turn the corner with Kings building on Aces and Aces building on Kings. That's all there is to it ! It sounds easy but winning the game is more difficult than you might think.

As with other games in the Solitaire City collection, you may tap on a card to send it flying to the foundations. However, Eliminator is susceptible to abuse of this shortcut by rapidly tapping on each exposed column card without any contribution from the cranium, until they shoot off to the foundations. To prevent this, a scoring penalty is incurred each time you tap on a card which has nowhere to go.