How to Play Klondike Solitaire

"Oh no, not another version of Klondike !", I hear you cry; and yes, I tend to agree with you. There are far too many Klondike games available. Solitaire City Klondike is different though. The inclusion of a timed scoring system adds a new dimension to the game. The quicker you complete the game, the higher your score; so make sure your mouse has been fed a fresh dose of steroids ! Your highest scores are stored on your computers hard drive so you have a permanent record of your achievements. Have a Klondike tournament with your friends, trying to beat each others scores. You'll be amazed at how addictive Klondike has suddenly become !

Anyway, if you've never played the Windows version of Klondike, had your head in the sand most of your life, or just had a deprived childhood, then here are the rules to one of the World's most popular solitaire card games.

The game is played with a single pack of 52 playing cards. After thoroughly shuffling the deck, 28 cards are dealt face down to form the tableau which consists of 7 columns of 1,2,3,4,5,6 and 7 overlapping cards from left to right respectively. The exposed card at the end of each tableau column is turned face up. The remaining cards are placed face down to form the stock. The game then begins. 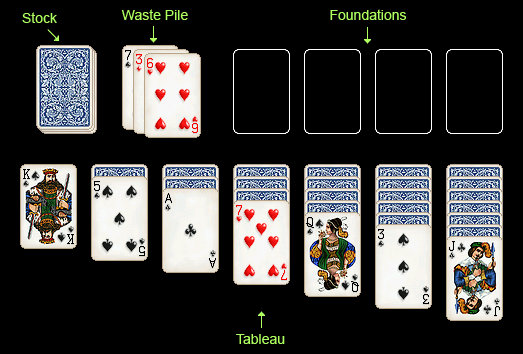 The object of the game is to build the four foundations up in ascending suit sequence from Ace to King. e.g. A

. A complete packed column of face up cards may also be transferred to the exposed card of another tableau column if the join follows the same descending sequence of alternating colours. If the movement of a tableau card exposes a face down card, then it is turned face up. When a tableau column is completely cleared out, the space may only be filled by a King or a packed column headed by a King. When no more moves are available from the tableau, the top three cards from the stock are dealt face up, without upsetting their order, to a single waste pile. The top exposed card of the waste pile is always available for play to the foundations or tableau. When the stock has been exhausted, the waste pile is picked up and turned over to form a new stock and the game continues. This procedure is continued until the game eventually blocks or is won. A variation of the game allows a single card to be dealt to the waste pile instead of three. There is usually a limit to the number of times the waste pile can be re-used to prevent the game coming out too often.

If all this sounds a bit complicated, then don't panic ! Solitaire City features a unique hands-on training system that can teach you the rules of an unfamiliar game as you play. Whenever you start a new game for the first time you will be asked whether you would like a training session; or you may press the Training button from the hi-scores or settings screens at any time.