How to Play Casket Solitaire

Casket is an interesting two pack solitaire game that I discovered.

The game is played with two standard packs of 52 playing cards, shuffled together thoroughly. Thirteen cards are dealt face down in the center of the play area to form a pile of "Jewels". A protective "Casket" of eight cards are then dealt face up around the jewels creating a tableau where building occurs. The casket is then closed by a "Lid" consisting of five face up cards where no building occurs. The remaining cards are placed face down to form the stock and the game begins. 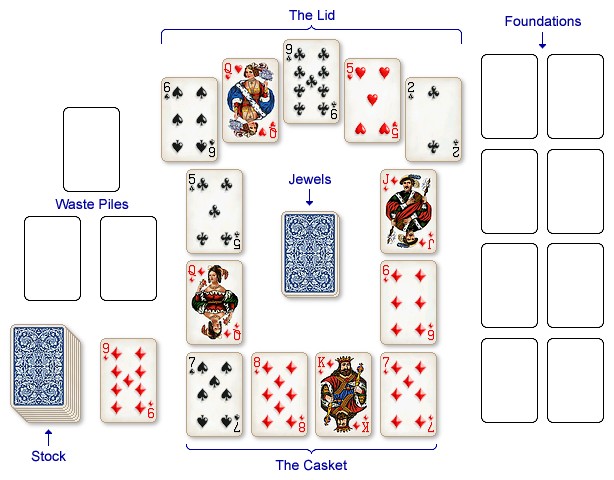 The object of the game is to build the eight foundations up in ascending suit sequence from Ace to King. e.g. A

Aces are used to start the foundations. Foundations are built up from Ace to King in ascending suit sequence. The only packing during the game, occurs on the eight casket cards and must be in, e.g. K

. Vacant spaces created in the casket are automatically filled from the stock. No building occurs on the five lid cards but they may be used to build on the casket cards or foundations. When a card is moved from the lid, the vacant space is automatically filled by one of the jewels. Opening the lid is the only way to remove the jewels. When no more moves are available, cards are turned from the stock, one at a time. If the card cannot be played, then it must be placed in one of three waste piles, the top card of which is always available for play. When the casket is empty of jewels, vacant spaces in the lid may be filled from the stock or waste piles, but not necessarily immediately. There is no re-deal and the game is over when the stock has been exhausted and the game blocks.

The key to success in Casket lies in opening the lid as often as possible to get at the jewels, and careful use of the waste piles.