How to Play Yukon Solitaire

Yukon is similar to Klondike except you can move groups of cards from a tableau column even if they aren't packed in sequence. As long as the column you move the group of cards to forms a descending sequence of alternating colours at the join then it's a valid move. This is in contrast to Klondike where groups of cards may only be moved when they are in proper sequence. The other difference between Yukon and Klondike is that all the cards are dealt to the tableau at the start of the game so there is no stock to deal from.

The game is played with a single pack of 52 playing cards. After thoroughly shuffling the deck, 28 cards are dealt in exactly the same way as Klondike to start the tableau which consists of 7 columns. The remaining 24 cards are dealt face up to the final 6 columns. The game then begins. 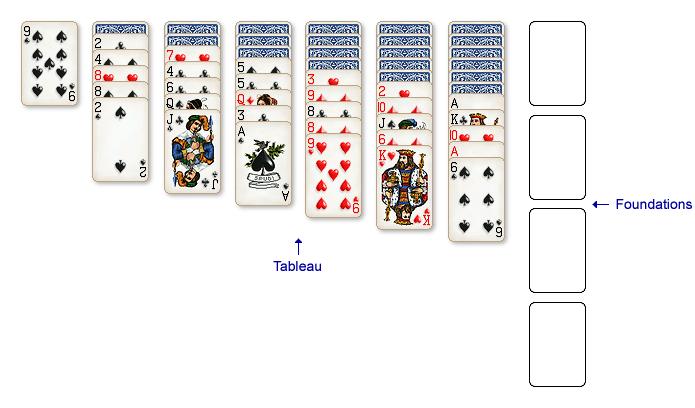 The object of the game is to build the four foundations up in ascending suit sequence from Ace to King. e.g. A

Any face up card, no matter how deep it is in a column, may be moved to another column if it creates a descending sequence of alternating colours, e.g. 10

. All the covering cards are moved with it as a unit and don't have to be in sequence. As long as the join between the two columns makes a descending sequence of alternating colours then the move is valid. As each Ace becomes available it may be transferred to one of the four foundations to the right of the tableau. The foundations are built up in ascending suit sequence to the King. Empty tableau columns can only be filled by a King or a group of cards headed by a King. As soon as a face down card is exposed, it is turned over making it available for play. It's important that you release the face down cards as soon as possible.